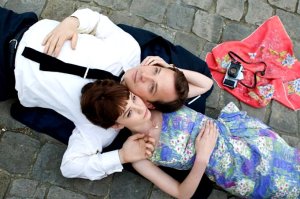 “An Education” (2009) Directed by Lone Scherfic, Written by Nick Hornby

So I know this movie is old and it does not fit the whole “si se puede” forum; however,  it does bring in some insight. This movie is one of my favorites because it depicts the hard choices we sometimes have to make in pursuit of our dreams and passions. As someone who decided to follow her passion and go back to school at the age of 27 this movie really hit home with me. Even when you think you have everything planned out perfectly, the Universe throws you a curve ball and makes you step back and look at things from a new perspective. As our protagonist Jenny does in this wonderful film.

“An Education” takes place in the early 1960’s and it narrates the story of sixteen year old Jenny. Who is a straight shooter; she is extremely intelligent and has more wit than any character in the film.  Jenny is studying hard to pass the Oxford acceptance exams; therefore, making her life pretty dull and ordinary since all she does is study.  That is until she meets David; the thirty year old dreamboat that gives Jenny “an education” to remember.  We witness how everything that Jenny ever yearned for became available to her and how she experiences things that she had only dreamed of.  We see Jenny grow as she has to choose between the glamorous dream life and the dream of her life-Oxford.

In this movie along with Jenny, we have three other female characters which are Marjorie (Jenny’s mum), Helen (Danny’s girlfriend), and Miss Stubbs (the English Teacher).  These three characters are key roles in this film; they are the personification of what Jenny’s choices could be.  For instance, let’s take the role of Helen: gorgeous blonde, who always looks as if she had walked off a catwalk but not so bright.  She believed that women turned ugly when they attended University and considered education to be a waste of time.  She considered all things sophisticated to be tedious and boring; relied deeply on Danny for all her material needs.  All she cared about was having fun, traveling, and having Danny buy her new things; whether it meant having to bear witness to robbery or putting up with Danny’s air of superiority.  Helen was in it for the material gain, did she love Danny? Not sure, but we do know she loved the lifestyle that Danny provided.  Helen reflects the life that Jenny could have if she stays with David, Paris one weekend and hey maybe Rome the next.  All she would have to do to maintain this type of lifestyle is submit and rely solely on David; she will no longer be an individual just another pretty face with no mind of her own.

Then we have Marjorie, which is Jenny’s mother.  Now here’s an interesting role, because this is what Jenny’s life would be if she chooses marriage over an education and a rock star life like Helen’s.  Marjorie portrays the woman who no longer defines herself as an individual, but is defined by her family.  She doesn’t do anything for herself, her focus and sole attention is on her household and family; this is reinforced in the movie in a scene in which Marjorie tells her daughter ‘that she did once have a life before she was married.’  Marjorie rarely voices her opinion, nonetheless argues about anything with her husband even if she has high concerns regarding an issue. Like Helen’s life, Marjorie relies solely on her husband.  His word must be obeyed even if it doesn’t make sense; there were times however when Marjorie gave glimpses of intelligence.  It made you wonder and/or even consider that she may have been smarter than her husband, but because of her role as the housewife had to dumb it down a bit to subdue to her male counterpart.

Next, we have Miss Stubs who is the nerdy yet very supportive English Teacher.  At one point in the movie you get the impression that she may be jealous of Jenny, but later you come to the realization that she is Jenny’s biggest ally and last hope to make it into Oxford.  Miss Stubs is the characterization of the life Jenny would have if she opted for a formal education. When Jenny came to her for help she realizes how unjustly she had judged her; she didn’t have an Oxford education but she did have the freedom that Jenny was so badly yearning for.  Miss Stubs had her own apartment, like Jennie played an instrument, liked jazz, and wanted to travel the globe. These similarities between the two women are what I believe gave Jenny a bigger push to proceed with her final decision.  Jenny who at one point believed her teacher to be against her, realized that she was merely trying to bring her back into reality so she wouldn’t miss out on the opportunity of a lifetime.  Miss Stubs believed in Jenny and in her potential of greatness; she didn’t want it to go to waste by getting caught up in the fanciful life that David seemed to be offering her.  Sometimes, if not always if things seem too good to be true, it’s because they are.

“The difference between a flower and a weed is a judgement.”